The Execution Of All Things (Mega Man 3)

(Wow. What a hell of a post we've got here. Today's guest post is by none other than Phil Sandifer himself, the very creator of the Nintendo Project that we've dug out of the dust and restarted thanks to... who knows? Boredom? Valya's grace? Some other purpose? Either way, this is a treat. If you have somehow made it to this blog without knowing who Phil Sandifer is, well... you can check his old Nintendo Project posts on the sidebar there. Or his current blog posts about Doctor Who and The Last War In Albion. Hell, speaking of Albion, he's got a Kickstarter going for that. Check it out. It's a hell of a thing... but for now, let's let the man himself talk about one of my top three Mega Man games; Mega Man 3.) 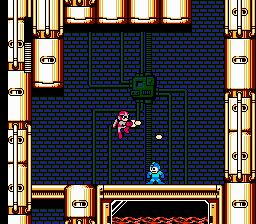 FreezingInferno’s idiosyncratic decision to try to bring me out of semi-retirement would have been doomed to failure had he not gone straight for the magic words: Mega Man. Indeed, I’m not sure there’s a more fitting entry for me to make my cameo appearance on than Mega Man 3, notable as the first NES game to rely upon nostalgia.

It is worth offering a capsule history of the Mega Man series up until this point, just to provide some fleeting historical context. In 1987, Capcom released Mega Man. It flopped. But improbably, the team that designed it was sufficiently dedicated to the task that they opted to work on a sequel, often on their own time. This game, Mega Man 2, was released in the US in 1989. Unlike Mega Man, it was a massive hit.

You can tell it was a massive hit because it was on the cover of the seventh issue of Nintendo Power, a magazine that, in this era, was essentially the sole arbiter of, if not taste, at least what Nintendo culture was going to be. The seventh issue boasts of a sixteen page feature on the game, featuring detailed maps with Nintendo Power’s typically useless hints (my personal choice is the helpful note that you should avoid hitting the horns on the giant faces in Air Man’s stage, if only because it means I know those monsters are called Air Tikis). But the point stands - Mega Man 2 was a big, iconic game that mattered.

And so it was no surprise that Capcom rushed a sequel out in 1990. This time Nintendo Power gave it twenty pages, providing walkthroughs not only of the eight Robot Masters but the four Doc Robot stages and a solid bevy of hints on what to do in Wily’s Castle. This is, of course, slightly perverse, in that the extended coverage ended up spoiling one of the game’s most notable moments.

See, after beating the eight Robot Masters in Mega Man 3, the player is forced to replay four of their stages. The stages exist this time in a ruined form - platforms have been blasted out of existence, it’s pitch black where it used to be day, and in every case the place has largely gone to the dogs, which is to say, become a lot harder. But what’s really notable are the bosses - eight identical junkheap looking robots (two for each level) who, when you encounter them, are inhabited by the spectral presences of the Robot Masters from Mega Man 2.

It is perhaps excessively self-evident to point out that Mega Man 3 is not the first sequel on the NES - indeed, Super Mario Bros and Castlevania both beat it to the threequel, and a bevy of other games reached prequel before it. But none of these games with the arguable exception of Castlevania (which reused some stage design) traded on nostalgia in quite this way. When Nintendo themselves made a sequel, at least in the US, the tendency was towards radical reinvention of game design. The Adventure of Link and Super Mario Bros 2 are shocking in their lack of resemblance to the originals, and much as Super Mario Bros 3 returns to normal form, it also cares more about its innovations than about recreating the feel of the first game. And, of course, plenty of sequels copy the best bits of the original and try to recreate them in a slightly different form.

But Mega Man 3 is different - the game builds steadily to the big reveal of the previous game’s robot masters, treating the recreation of the past as a big reward earned by playing through the present. It’s fundamentally backwards looking in a way that the NES had never quite been. And, of course, it’s one of the classic moments of the era. Anyone who liked the Mega Man series remembers when the Mega Man 2 robots drop in.

And yet in so many ways it also spells the beginning of the end. Certainly for the Mega Man series, which would never be this good again. It’s telling that Mega Man 3 has the first outright moment of inexcusably bad design in the series - a lengthy section requiring the Rush Jet that, should the player fail at, they’ll be unable to reattempt without a game over because the recharge items left scattered around will all be used up and the Jet won’t have enough power to get across the level. It’s also telling that this is the last time that the Robot Masters can actually be usefully approached in multiple orders - come Mega Man 4 the stage select will become a trick to slow the game down while you figure out the one usable path. (Notably, there isn’t even a true circuit of the Robot Masters in this game, but two: Top Man - Shadow Man - Spark Man - Magnet Man - Hard Man forms one self-contained loop, while Snake Man - Needle Man - Gemini Man forms another.)

But the real end is visible, as ever, in Nintendo Power, which, alongside the twenty pages of Mega Man coverage includes a full page tease of the Super Nintendo, recently announced in Japan. The Super Nintendo would steadily grow to be a larger and larger part of the magazine until, eight issues after the Mega Man 3 cover story, Super Mario World finally got its cover story and we entered a period in which the entire NES became an object of nostalgia.

And so Mega Man 3 ends up being a strange game - the beginning of the end, and yet a desirable sort of end - one that suggests that, in its own way, we wanted the NES era to fade into lost memory even as it was happening.
Posted by Frezno at 18:21

The Weirdo Who Runs This Thing

Frezno
A weirdo with a silly voice who wants to write about old video games.