A Quantum Microcosm, Adrift On The Sea Of History: Part 2 (Quantum Leap Season 2) [2.4]

(Continued from 2.3)
Good Night, Dear Heart: This one's a bit of a contradiction, simultaneously a traditional sort of story and one with an ethereal, gonzo look towards the future. Sam's a mortician in New England in 1957, and there's a dead blonde in his parlor whom everyone believes ended her own life. Sam, after finding a strange wound on her head, is convinced she was shot and it was a murder before proceeding to go into full murder mystery detective mode. When you put it down on paper like that, it sounds pretty straightforward with nothing seeming out of the ordinary. There's one strange choice that stuck with me, though, and it along with some other themes and mysteries revealed over the other gave me an odd, if maybe inaccurate comparison point. 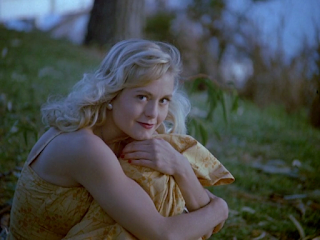 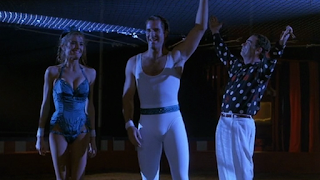 That brings us to the other conflict of the story, which is Sam's own internal cross to bear. Sam Beckett, you see, is afraid of heights. Hanging off of a trapeze 50 feet in the air by just his legs is not a prospect he takes to easily because of this. It takes a lot of coaching from both Al and Eva to get Sam to push out of his comfort zone a little and actually try to do the trapeze thing to learn how to catch Eva well enough to change the future. I like it when the show does things like this, not only improving the lives of the people close to the leapee but Sam's life as well. Yeah, of course he catches Eva in the big circus act at the end. He regains the trust of Victor's father, making him proud of his talented acrobat son. More than that, though, he faces his fear head-on and eventually powers through it enough to do the right thing and change the story. Certainly, Sam will still be apprehensive about heights, but facing the thing and overcoming it in this instance is a good thing. This might be the shortest I've ever had to say about one of these, mostly because I go wild with what happens, but yeah. That's all I've got. Acrobat makes family trust him and Sam overcomes fear of heights a little. Good episode. Not bad for watching it on vacation in an upstairs room in the middle of a heat wave. Speaking of, what else did I watch there?
Maybe Baby: This was a very interesting first watch of a show. I can't tell you how it works on a rewatch when you know everything because I've only seen it the one time, but it's an episode that kept me guessing and on the edge of my seat, so to speak. It's 1963 in Texas and Sam is helping a stripper named Bunny steal a baby so that the kid can be taken back to her rightful mother in New Mexico and out of the hands of the guy who stole the baby in the first place. Nothing like a bit of crime in service of doing the right thing, that's what "Freedom" was half about. There's just one teensy little problem with all of this that complicates matters and makes for a stressful watch: is Sam really doing the right thing? 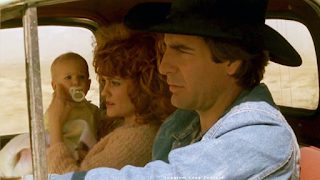 A Quantum Microcosm, Adrift On The Sea Of History: Part 2 (Quantum Leap Season 2) [2.3] 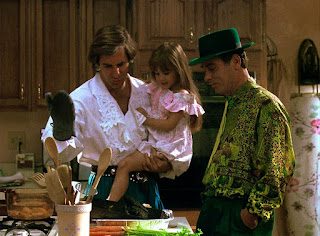 A Quantum Microcosm, Adrift On The Sea Of History: Part 2 (Quantum Leap Season 2) [2.2] 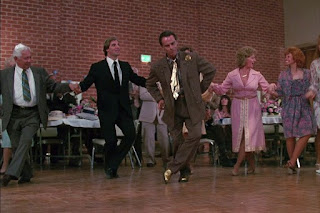 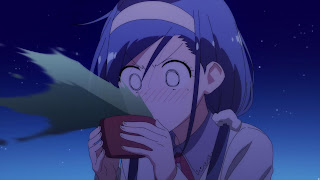 OH-- OH MY GOD WH-- SCOTT BAKULA SAID WHAT? BUT HE CAN'T-- I MEAN, THAT WORD'S-- OH GOD HELP ME!!!!!
Jimmy: Okay, we have to tackle this one different, and deal with the elephant in the room I was screaming about there. This episode's major issue involves (and I apologize in advance if this isn't the respectful term for it, I tried my best and did some Googling) intellectual disability, which our titular leapee has. Except they don't say "intellectual disability" or anything of a more graceful nature. They say a word I will not repeat, beginning with R, multiple times. Lest you think it's just the prejudiced time of 1964 saying it pejoratively about Jimmy, Sam and Al say it too. The thing I reacted to in horror was the teaser/opener for the episode, where Sam looks in the mirror after Jimmy's brother has exposited this fact to him and says, questioningly, "I'm [REDACTED]?". So, you know, major major poorly aged alerts all around for this one. Even before we begin, that's not great and is a black mark against the episode. 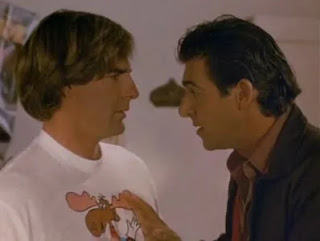 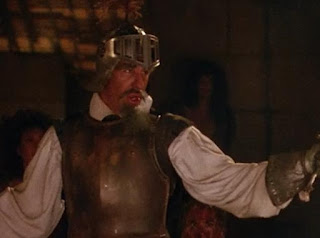 For now, it's 1979 and Sam is Ray Hutton, an actor and understudy for a stuffy thespian who's currently the leading man in this theater company's adaptation of Man Of La Mancha. I must unfortunately show my ignorance and tell you all that I don't know a thing about Man Of La Mancha or Don Quixote. He fights a windmill, but I could not tell you why he fights a windmill or the deeper thematic significance of him fighting a windmill. We're 10,000 words deep into me writing about a time travel show from 1989. Okay but I did just skim the plot synopsis of Man Of La Mancha and there's a Knight Of The Mirrors in the play? Lit. Sam doesn't get to go on stage as the leading man, a bit of a drunk, goes on and brings the house down. It's just as well because Sam doesn't know the lyrics yet.
What he does know is this familiar love interest waving to him after the show. Nicole, an old flame of Ray's, and someone who Sam recognizes. She's a piano teacher, and in fact she taught a young teenaged Sam how to play the piano. Teen Sam had a loving crush on his piano teacher, but nothing ever came of it (because that would have been inappropriate, to say the least) and so time moved on. Now, though, he's grown up and the time frame means it's only been a decade since those piano lessons. Sam wants his second chance, and wants to express his love to Nicole. He's doing so as Ray, yes, but there's that naive idealist hope that Nicole will see the Sam inside Ray and reciprocate that love he's held close to his chest for all these years.
Well, since the thing Sam's here to do is save his drunk leading man from breaking his leg while tripping down the stairs on stage in 3 days' time, there's nothing much else to do but rekindle that romance with Nicole. It's interesting to compare this with "Star-Crossed", as one of my takeaways from that episode was how grandiose and theatrical the gestures of love there were. Both Sam and Jamie Lee were expressing themselves via these big sweeping declarations of it being fate and destiny that these lovers should entwine and let their feelings blossom. Here's this episode, and while it's Cervantes and not Shakespeare it's still literally about the artifice of acting and the theater. The episode really plays with that when Nicole is cast as an understudy as well, playing the role of Don Quixote's love interest Dulcinea. Watching the two rehearse, getting into their characters, you can feel the sense of using them and the words of the play to express themselves to one another. Really, who is Sam if not an actor, given a different role every week and having to play his part? With the Quantum Leaping, all the world really is a stage.
Of course, we need a little conflict, so we have some mild contrivance and misunderstanding involving the jealous leading lady who's currently playing Dulcinea manipulating things so Sam thinks Nicole made it with the leading man, making Sam bitter and not prone to saving him from breaking his leg. Long story short, he does come through at the last minute, Sam and Nicole hash out their misunderstandings, and the pair get to play Don Quixote and Dulcinea on the stage. Goddamn, Scott Bakula's got pipes, y'all. This is a good little episode, a nice bit of light levity from the serious thorny takes on prejudice and bigotry I've had to deal with for a little while now. I like the metacommentary on theatricality and playing a role, and the episode even plays with it a little. The end credits are usually just stills from the episode and static credits. This time it's an actual curtain call featuring both cast and crew on the theater stage, the credits scrolling like the end of a film. All they needed was to link hands and bow. Exactly the levity I needed. Not a bad one at all. 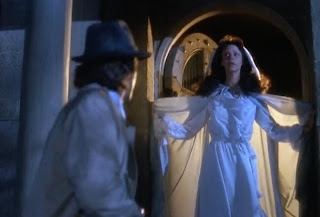 The Weirdo Who Runs This Thing

Frezno
A weirdo with a silly voice who writes about cartoons and sci-fi.